Recently, I had purchased a few "orientation sensors" (the STMicro FC30 -- basically a dumbed down 3 axis accelerometer) from Sparkfun. Its a very tiny surface mount (LGA-14 3x5x0.9mm
SMD) package and there is no breakout board yet :-( 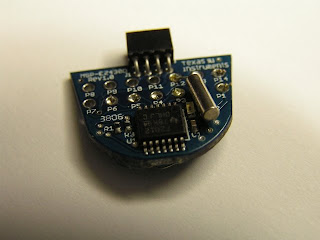 So, I used a dab of 5-minute epoxy to hold it in place and began to solder jumpers between the EZ430 and the FC30. Wire-wrap wire (30 AWG) proved to be to thick (and heavy), so I used individual strands of wire from an old test lead cable. 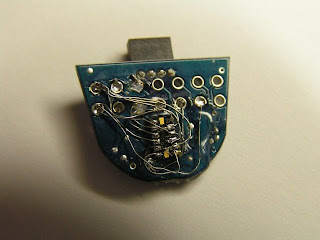 I used a 5 Diopter Luxo magnifier lamp so I could see what I was doing (Oh, those are so nice but pricey. But they are worth it. You position them and they don't move! I have a "low end" KFM1A).

It took a couple of nights (fora total of 2 hours) and I checked for bridges using my son's microscope at 40X. It didn't look pretty, but it held.

Since I was using bare wire strands, I had to be careful not to short them together, so I "layered" epoxy between wires that crossed each other.

I was very careful not to cover the contacts (yet) with epoxy in case I had to rework the solder. When I got all of the pins soldered (I basically ran the interrupt lines to P1.1, P1.3 and P1.4 on the MSP430) I did a quick continuity check to make sure nothing was shorted. Next, I wrote a little app to detect orientation and tested it in the IAR debugger. Things were looking good! 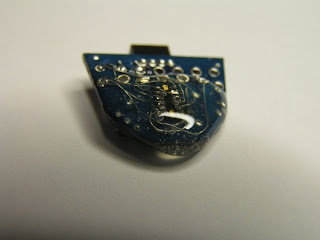 (At this point, I must admit that I have prior experience with this sensor -- with help I managed to kludge a similar wiring job but to a 1 inch protoboard, not directly onto an EZ430. So, I was already familiar with how the FC30 works.)

Once everything looked good, a added a liberal dollop of epoxy to the bottom of the MSP430, and now I have a nice little development board to play around with orientation sensing.

This was an exercise inspired by the amazing Willard Wigan.
Posted by toddbot at 9:07 PM 7 comments: